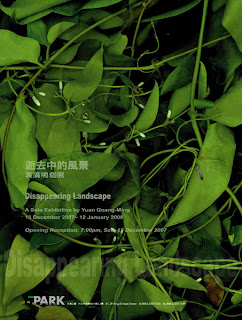 Yuan Goang-ming will present his new series Disappearing Landscape in his solo exhibition at IT Park, breaking his silence since the City Disqualified series in 2002. In this new work, a concept of removal has been adopted again, and transformed into a more poetic concept of disappearing. The presently disappearing landscape not only indicates natural scenery being lost, but also involves imagined scenery and how we identify things.

Disappearing Landscape is not a narrative, but brings up an embarrassing state of presence that exposes an ambiguous relationship between 'illusion' and what we call 'truth'. The work not only disguises a profound reality that is disappearing, but at the same time is covertly reflecting a profound reality.

This series consist of digital images and a multi-channel video installation. The video installation is a synchronizing projection with three screens, with each part filmed simultaneously by three cameras that move straight ahead. The lens passes through the artist's home, neighboring abandoned houses, a forest and a city shot from a low angle.

The digital imagery shows that Yuan painstakingly removed all the veins from scanned images of leaves via computer manipulation. While the rhizomes and branches remain, the artist creates scenery that is homogeneous, complex, familiar, yet unfamiliar. Every leaf links to a rhizome and to a branch, but it has no vein on its surface--- it is as if the leaf has no distinct face while it seems to be surely originating from somewhere. Does a leaf have a reason to be a leaf? How is it defined as a leaf, just like how are we identified as individuals, by our surface features, or by something deeper? This strange scenery is still, only disappearing. 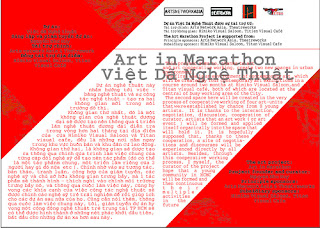 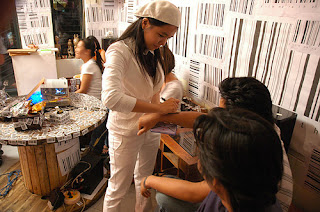 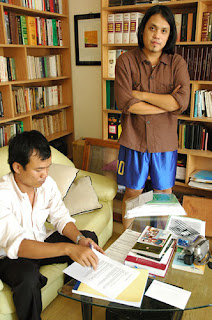 ＊＊＊＊＊＊＊＊＊＊＊＊＊＊＊
Motoko Uda (本名：Motoko Judge ジャッジ資子) is a London based AMI trained Montessorian. After graduating from Mills College, CA, USA, she moved to Vietnam in 2000 to open and run “Gallery MOCO.” Over an 18 month period, she showcased 14 exhibitions by 22 Vietnamese and international artists. In 2002, she closed the gallery in order to focus more on her practice as a writer. Uda co-founded a little blah blah (albb)together with Sue Hajdu and Nguyen Nhu Huy. This artist’s initiative acts as a platform for interactions in contemporary visual art and other creative practices, and is actively involved with networking and forming collaborative projects throughout Asia and the world in order to promote exposure, connections and information-flow in and out of Vietnam. Uda has also delivered lectures, studies reports and TV programs on Vietnamese Contemporary Art. As an art writer she has contributed to a major Japanese art magazine, 美術手帖Bijutu Techo (BT),ARTiT, Saigon based art magazine AART and Tokyo based website アート遊覧art-yuran. She holds AMI Montessori Assistant certificate for 3-6, AMI Diploma for Assistant to Infancy (Birth to 3) and AMI Diploma for 3-6. She has a 6 1/2 years old son.